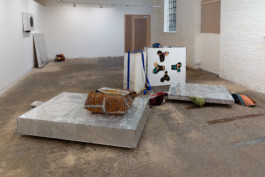 In 2013 we launched an associate membership scheme at Limbo which was intended to widen a community of artists around Limbo and introduce us to the work of artists we might not have uncovered through our independent research. It was a huge success and the work that was shared with us was of such high quality it felt like it would be entirely possible to run the whole programme through the scheme. In 2013 and 2014 we held group exhibitions of members' work. The first was selected by artist Bob and Roberta Smith and Sarah Martin, head of exhibitions at Turner Contemporary; the second was selected by artist Adam Chodzko.

From each open exhibition, the Limbo team chose one artist for a solo exhibition of new work to take place in the next round of programming. The first was Nigel Massey, the second was Melissa Burn.

Massey assembles his artworks, combining bespoke fabricated elements with repurposed objects and materials. His approach can perhaps be best understood through the polysemous word stage, which refers simultaneously to development, structure, action, and acting.

For Between Acts, Massey prepared two complementary sets of works which developed his interest in the separation between the creative idea and the created object. This interest is not so much about how intentions differ from outcomes, but where they fuse.

Creation cannot, by definition, be premeditated: To create is to bring something into existence, and must therefore be accidental; if one knows what one is about to make, the creative moment must have passed. For if we have thought of something, it already exists in some form.

The moment of creation is usually seen as belonging to the artist’s studio or workplace: A phase leading to the production of a finished object which will convey beauty or meaning. In Massey’s work, however, artworks are proposed as an element in the production of a kind of theatre through which the viewer might glimpse the ‘making’ rather than the ‘made’.

The two bodies of work presented in Between Acts considered separate elements of this ‘theatre’. Each connected to a historically distinct artistic tradition and proposed that it might be understood in relation to the others.

In his use of the rectangle – the dominant picturing device of western art – Massey engaged with a history of painting which considers images both in terms of ‘windows’ into projected spaces, and in terms of high modernism, a tradition which forgoes the projection of pictorial space in favour of the effect of materials on the surface of a flat plane. These works did not employ traditional ‘picturing’ materials such as paint or pencil, and the imagery was often created through a use of what might appear to be the discarded materials of artisanal or construction processes.

Although relatable to picture-making, these works were deployed in ways that are not concurrent with the standard presentation of paintings or photographs. Some were freestanding, with their ‘backs and sides’ open to view, others lay on the floor. Furthermore, they were often draped with Jacquard tapestries and packaging harnesses, suggesting works in transit, obstacles and hoarding.

The second body of work considered ‘props’. Just as the first body referred to transit and storage, here each piece employed as support structure a component resembling a domestic or industrial tool for containment or movement. Ostensibly pictorial elements were presented as time-bound material objects: the Jacquard tapestries reappeared, cut, folded, draped and stacked. Sometimes they appended casting cups and runners (usually discarded following the casting process); piled or wrapped-up. These works suggested a form of sculpture which is unready – which has ‘faces’ that are not turned towards the viewer. The sense is that these are more ‘workers’ than ‘works’ – devices for positioning and juxtaposing elements.

With these different collections Massey proposed to give us a glimpse into the ‘backstage’ activity of artworks, highlighting the artifice of finished works and exhibitions and drawing us closer to the collisions of accident and action that lead to creation. As in Brecht’s Dialectical Theatre, artifice wasn’t condemned but foregrounded, encouraging the viewer away from a ‘suspension of disbelief’ and towards an engagement with the contradictions which abound in the space between the making and appreciation of culture.

stage noun \ˈstāj\
1. a particular point or period in the growth or development of something
2. a raised platform in a theatre, auditorium, etc., where the performers stand
3. the art or profession of acting and especially of acting in theatres 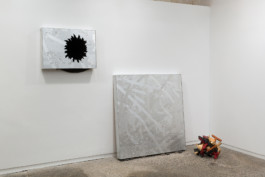 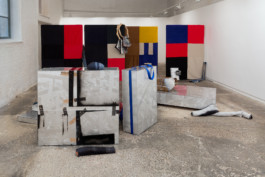 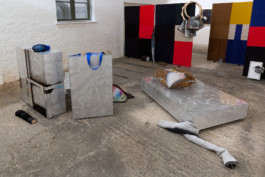 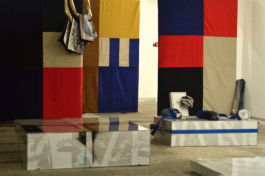 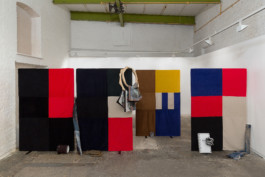 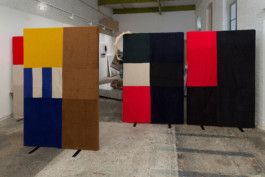 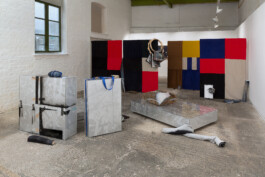 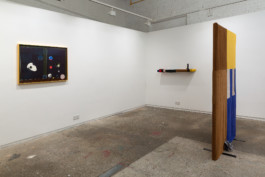 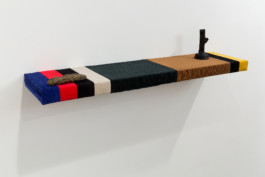