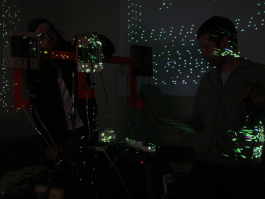 For the second show in the Bad Translation programme, CRATE has commissioned Juneau Projects to create a new live work for Margate's famous Shell Grotto. The piece, entitled Formosa (the former name for Taiwan - from the Portuguese word for 'beautiful'), builds upon the artists' ongoing interests in both vernacular architecture and in the potential for crossover between musical performance and artistic production.

It takes as its starting point the enigmatic history of the Grotto and its documented use as a place for séances, also considering the use of electrical technology as a means for recording paranormal activity.

The underground Grotto, in which 4.6 million shells form an uninterrupted 2000sqft mosaic of patterns and symbols, was discovered in 1835 by James Newlove when he lowered his son into a hole that appeared as they were digging a duck pond. Its original purpose is still the subject of much speculation: It has been described variously as a pagan temple, a Georgian folly and the meeting place for a secret cult.

'Formosa' does not offer any conclusions about the 'true purpose' of the Grotto. Instead, it draws on the idea that the Grotto is a place where ideas and sensibilities intersect, falling somewhere between a gig where the performers aren't immediately apparent and a post-apocalyptic gallery where troglodyte survivors make sculptures out of audio-visual equipment whose practical purpose has become obscured by the passing of time. The work will use audio playback from obsolete data cassettes to generate sounds which reverberate throughout the Grotto's labyrinth of underground tunnels.  These sounds will be processed digitally to trigger hallucinatory visuals which will animate the shell walls.

This installation is the latest in a line of works by Juneau Projects which explore the relationship between modern technology and folk and pagan traditions, finding untapped ritual or symbolic potential in objects that might normally be regarded as purely functional.

In their earliest work, Juneau Projects ritually destroyed mobile phones, portable CD players and microphones by drill, flame and shredder. The technology they destroyed produced playback as it 'died', 'screaming' in its final seconds. It was hard to determine whether these acts were exorcisms - aimed at expelling the 'ghost' from the machine - or a luddite torture fantasies, savagely mocking the idea that technology's usefulness might provide security against nature, ritual or human vengeance.

Later work has suggested a gentler marriage of folk and pagan traditions with modern technologies. 'Trappencamp', monument the pair were commissioned to produce for Tate Britain last year, was a paradoxical 'ruin', cut from plywood and emblazoned with heraldry that had clearly been generated using computer software.  This new work shares with that piece an interest in obsolescence as a signifier of authenticity - a point which will be emphasised by the installation's relocation from the Grotto to CRATE's Project Space after the 13th.