CRATE presents an exhibition of new work by James Howard.

Each piece is a promise of a better life, a consumer con or an offer that is too good to be true: Gold Rush encourages people to steal "Nanna's gold" and turn it into cash, Coin Op Plasmas demands "another few quid" because Jeremy Kyle is on telly. And Dirt Cheap Flights aims to pull crowds away from Britain’s sea-side resorts.

The work takes its cues from advertisements for products and services that are so implausible or immoral that we would normally find them only on the internet - an unpoliced realm. In this exhibition, the advertisements have become real. Rendered at billboard size, they become menacing: reminders that we know little about those shady characters who fill the ‘junk’ in our email and want our credit card details.

Howard’s work seems to have been made by one of these shady characters: of no specific race or nationality (but definitely foreign), with little interest in local or national culture, insincere, probably male, and motivated by every vice, this persona is an unknowable, generic ‘other’. He does not care about the audience enough to check his English or make the images he uses beautiful or appealing –he is confident that there are as many people out there vulnerable enough to be drawn-in by his quasi-adverts as there are savvy ironists who will find the awkward Chinglish and odd products laughable.

And this character has seemingly infiltrated the gallery. Unintimidated by the art world’s refined sensibilities, he has covered every wall of CRATE’s project space with his vulgar propaganda; CRATE is, after all, merely another venue for the potential exploitation of the masses.

But are we able to separate Howard’s intentions from those of the character he seems to inhabit?

James Howard began as a self-proclaimed scammer on the internet in the late 90's – which earned him quick cash and eventually a year in prison. Now Howard's scams found his artistic practice. He attended London's Royal Academy Schools, is included in the forthcoming Saatchi Gallery show: The Power of Paper and has been recently exhibited at Plastic Culture The Legacy of Pop with Andy Warhol, Jeff Koons and Takeshi Murakami. He is represented by Sartorial Contemporary Art, London. 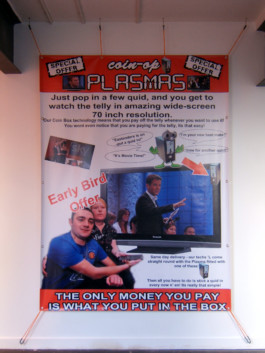