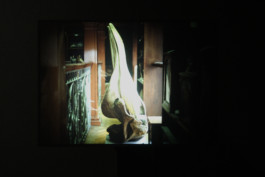 In 2011 she encountered a stranded whale on the shores of Pegwell Bay, Kent. Struck by the immensity of the mammal, the spectacle that it created, and the scientists that were performing the visible necropsy, she began to investigate the reasons why they strand. The elusive truth behind the behaviour of these creatures, difficult to discern through theories that often seem as outlandish as folk law, has become the subject of her current body of work.

The exhibition at LIMBO consisted of two rooms containing a series of film works, slide projections and sound recordings. The first room investigated the phenomenon of whale strandings and the second, the culture of whaling. The rooms operated in synchrony - with slides and audio clips playing in a specific sequence - aiming to create a filmic sense of time for the viewer navigating the gallery space. A script for a feature length film, Exploding Whales, accompanied the show, while the audio from the unmade film played in the gallery.

She was filmmaker in residence at Virtue and Industry, at Picture This, Bristol in 2010 and has attended the Berlin Talent Campus and Locarno Filmmakers Academy. 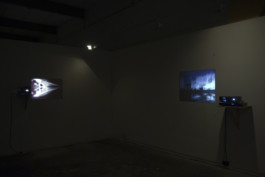 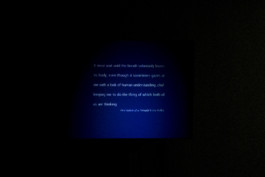